We build bridges between the industry and research institutions

Hydrogen peroxide is an increasingly popular product. Belinka Perkemija as an important producer is very well aware of this and is, therefore, in the last two years intensively connecting with all major research institutions.

In relation to this, we have organized the Belinka Open expert event “APPLIED SCIENCES WITH SYNERGY”, where lectures were given by many lecturers from faculties, various institutions and companies. Product Manager, Head of Technology and Development at Belinka Perkemija, Ivan Grčar, said about the cooperation: “With the synergy of knowledge of various technical faculties and institutes, we will achieve our development goals in the industry much faster. Especially interesting is the field of production and use and the development of new hydrogen peroxide formulations (H2O2) with a higher added value.”

This powerful and efficient oxidant is used in pharmacy, medicine, cosmetics, the detergent industry. The possibilities for its use are also shown elsewhere, such as in agriculture, veterinary medicine, preparation of drinking water for people and animals, and more. The development in this area is also expanding in the direction of new forms of accumulating hydrogen peroxide with long-lasting activity.

Franci Stele, Director of Belinka Perkemija, was satisfied with the professional meeting and the lectures: “The field of peroxide chemistry has a bright future, so we try to be innovative and daring on a daily basis. In this regard, we are assisted by external research institutions with which we successfully cooperate. At the Belinka Open meeting, we built even deeper connections and defined the direction of further hydrogen peroxide development and the expansion of its use in new areas. I would like to thank all the lecturers and participants for making this event diverse and effective.” 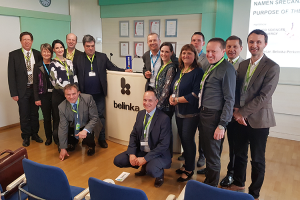 The website uses cookies, which provide a better user experience, site analysis, and the possibility of targeted advertising online. Please click on the "I Agree" button if you agree to their installation. You can change your settings at any time. More | SettingsI agreeX
Revoke cookies